One of my New Year’s resolutions was to take more ‘day-ventures’ rather than sitting home on any given Saturday being uber lazy. I only resolved to do this for 10 Saturdays, the other 42 I can be as perfectly lazy as I want. Well the last weekend in February scored me my first outing. I went to visit my buddy in Kansas City to have a Dexter Marathon. There is a bit of a back story to this.

We have this other friend who has enjoyed this show for quite some time now (since it’s now in it’s seventh season we’ve been hearing about it for awhile now). Allie (the KC friend) and I both mentioned that we wanted to see it but weren’t keen on watching it alone. It’s one thing to watch a scary movie by yourself, it’s a completely different story to watch an entire season of scary suspense. Our solution? Hunker down for a weekend and marathon that sucker (a season at a time) and since it was winter this seemed the perfect time to start.

That lead to me heading down to KC two weekends ago to visit one of my dear friend and get scared. It was a perfect little weekend but after watching three episodes the night I got there and one in the morning while we ate our breakfast we decided that we were burning through episodes fast and would need to get a couple more disks (had only acquired 2/4) and we also needed to get out of the house to shake off the willies. Cue the Day-venture. I’m not one to shop a lot but if done sporadically I’ve found I quite enjoy the activity and I definitely dig the Zona Rosa vibe. In some ways it’s a mall, but only in that there are a mass of stores in one localized area. The major difference: it’s completely outside. Well the walkways are. It’s so nice being able to walk in the sunshine as you flit from store to store, even in winter. Anyway if you’re ever in KC and the prospect of being in the Plaza is too much, head out to the Rosa. 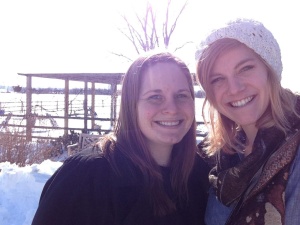 We neglected to take a picture of us doing the actual tasting, but we did snap a quick pick of the arbors at the winery as proof of the excursion.

Part two of our Dexter Diversion was to hit up a winery near Rushville, Kansas. Yes we could have gone to a winery closer to KC but the drive is quite scenic and we had the entire day. Also the winery was a ‘two birds, one stone’ situation. As stated I wanted to go on Day-ventures, Allie had resolved to go on more wine tastings so she could become more knowledgeable about wine.

We were able to try nine different wines which culminated in a refreshingly warm mulled wine to heat us up before we braced ourselves for the snow outside. Driving back to KC we both agreed we’d have to return in another season because that part of the state has some lovely hills and valleys to take in while you drive. As a side note there was a duck or something hitch hiking. We almost hit it both times because the thing switched which side of the road it was waddling on as we made the return drive – fun times.

Once we made it back to the city we stopped at a block buster (not kidding some of them are still around) and picked up the last two discs and hunkered in. After another three episodes we needed another break and coincidentally there was a birthday outing we could join. Nothing creepier than after watching this ‘normal Joe’ character who is secretly a serial killer to go out where there are a mass of normal Joes. Yeah, have fun with that one all of you who have an over-active imagination.

In all we made it through 10 of the 12 episodes of season 1 which I think is fairly impressive for a span of about 36 hours. As Allie mentioned it’s nice to do it this way, that way you’re freaked out for a concentrated time and then can move on. I couldn’t agree more.

Free Writing: You must write every single day of your life...

Milliner’s head was pounding as he woke up. As he tried to shake away the fog he realized the pounding was also on the window he was leaning against. Bleary eyed, he glanced out to see a set of knuckles wrap in quick succession right by his head. Confused his eyes followed the arm up […]

Serena’s ear twitched as the door clicked shut. Hearing the soft beep as the scanner outside the door registered a key scan she clinched her eyes shut. Arching her back into a deep stretch she snuggled deeper into the pillow and fell back asleep. An hour or so later she was harshly awoken by a […]

Distraction is the name of the game

She puffed a whisp of hair out of her face. It resolutely fell back into her eyes as she gritted her teeth in concentration. Carefully she continued to place one hand in front of the other as she crossed the floor. Her head was starting to pound with all of the blood trapped there after […]

“Have you had enough yet?” “Has the answer ever been yes?” Melker winced as he bent and picked up his jousting stick, “Terms?” “Loser picks,” Cho sang. “Right,” he sighed, rolling his eyes. Looking up he spotted the platform. Narrowing his eyes he examined the ledge. Perhaps it was the early start to the day. […]

Seven days to save my life

This letter is to inform you that, for the time being, you are dead. If you do not clear the Saxon situation up within the week we assure you this is a state of existence that the Pentrillion will ensure comes to pass. We shouldn’t have to say this, but given recent events, we will […]

What am I reading now?