Being a child of the late 80s/90s when I read the prompt for this week’s League of Extraordinary Bloggers the first thing that popped into my mind was Harry Potter and the Deathly Hallows. In both forms I tear up but at vastly different parts.

First up the movie. Every single time Dobby dies I cry, not nearly as badly as I did the first time but all the same. I think this is an amazing feat because it was completely fabricated (the character). I mean a bit of CG and a prop were what they were going off of but its just so sad. Here this elf gives it all for thesee kids and then he says he’s just happy to be with them. That was a right cheery way to end that movie. Granted, with the subject matter you could hardly end it at a circus right?

In the book, I’m sure there are different spots that I cry at because dear JK did an amazing job at making the characters real. (To this day I have issues reading/watching the 5th book because my hatred for Umbridge is so strong. Never did I hate Snape or even Voldemort as much as I detest Umbridge.) In fact this week’s prompt has sparked a renewed interest to reread the series. Granted I am listening to them on audiobook and have completed the first book so it’s a bit easier to manage since I can then multitask. Refocusing, a time I cried that is burned in my head was the fall after I graduated college. Where I worked at the time allowed you to listen to music whatever while you worked so long as it didn’t interfere with yours/others performance. That meant we usually brought earbuds. I was listening to the 7th book and was luckily out on my lunch break when Harry went to the forest to meet Voldemort. I was driving around town and I started crying. There is something about that scene, when his parents come to meet him and Series and Remus as well that just makes me so sad. So here I am driving back to work crying. I had to reign it in quickly, it would not do to have tear-stained cheeks at work. That was a bit embarrassing. I’m not sure what I would think if I was driving around and saw someone crying behind the wheel of the car next to me, I’d probably think something bad had happened (a death or breakup perhaps) not that they were listening to a book. 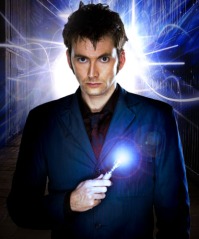 As I continued to think of this topic another thing that triggers the waterworks in the ‘TV’ department is Doctor Who. Of course when Rose is forced to leave the Tenth Doctor I cry (still have issues watching that entire season because I know what happens. However even before this prompt was posted I initiated my Dr. Who re-watch. I’m only on the fourth episode of the first season though, so still no Ten. Rose yes, Ten no. ). Another episode that always gets me though is the Human Nature/The Family of Blood. Basically the Doctor makes himself human to outrun some bad aliens and falls in love. However the aliens find him and he has to go back to who he was, but that ends the existence of the man he has become. He just never gets to be happy and with the one he wants to be with. I think all that emotional baggage just sets me up so when I see the Doctor years later checking in on a kid whom he taught I am pushed over the edge and tear up. They reappear at a veterans memorial and salute the kid, who had fought in WW1.

I am sure there are other things I cry at but these were the ones that readily (and persistently) popped into my head when I got the summons earlier this week. In other news sorry for the hiatus. I’ve been working late and prepping for the road trip I am taking with a friend. Which will prompt another hiatus starting tomorrow. I don’t plan to have a laptop so I may or may not be posting next week. Bear with me and I will return to regular posting (as long as I’m not too back logged at work) the week of the 22 where topics will include reviews of Gone with the Wind, Harry Potter and the Sorcerer’s Stone and board games with family members.

6 thoughts on “LOEB: What movie, TV show, book, etc. turns you into a blubbering baby every time you see it?”

Free Writing: You must write every single day of your life...

Milliner’s head was pounding as he woke up. As he tried to shake away the fog he realized the pounding was also on the window he was leaning against. Bleary eyed, he glanced out to see a set of knuckles wrap in quick succession right by his head. Confused his eyes followed the arm up […]

Serena’s ear twitched as the door clicked shut. Hearing the soft beep as the scanner outside the door registered a key scan she clinched her eyes shut. Arching her back into a deep stretch she snuggled deeper into the pillow and fell back asleep. An hour or so later she was harshly awoken by a […]

Distraction is the name of the game

She puffed a whisp of hair out of her face. It resolutely fell back into her eyes as she gritted her teeth in concentration. Carefully she continued to place one hand in front of the other as she crossed the floor. Her head was starting to pound with all of the blood trapped there after […]

“Have you had enough yet?” “Has the answer ever been yes?” Melker winced as he bent and picked up his jousting stick, “Terms?” “Loser picks,” Cho sang. “Right,” he sighed, rolling his eyes. Looking up he spotted the platform. Narrowing his eyes he examined the ledge. Perhaps it was the early start to the day. […]

Seven days to save my life

This letter is to inform you that, for the time being, you are dead. If you do not clear the Saxon situation up within the week we assure you this is a state of existence that the Pentrillion will ensure comes to pass. We shouldn’t have to say this, but given recent events, we will […]

What am I reading now?